Have You Switched to a Roti Maker Yet? – The Rotimatic Blog

Automatic roti makers such as Rotimatic is generating interest for its capability to economize the time spent on cooking.

In the world of food technology and machinery, appliances such as coffee makers, blenders, microwaves, and dishwashers have revolutionized cooking and simplified our lives. A recent addition to this list would be semi-automatic to fully automatic roti makers. The benefits of these advances in the domestic space have been seen to impact students, young professionals, and homemakers – especially women.

Nonetheless, as compared to other functions, the tedious process of making rotis or phulkas, chapattis and other types of flatbreads are largely undertaken manually. Talk to any South Asian with a knack for, or in the habit of consuming rotis and you’ll know how tedious and monotonous the process of making those can be. The steps are multiple and involve a high degree of complexity. The intricacy further diversifies when you take into consideration the variant or type of roti preferred in a different household.

Dig a little deeper and you’ll know that it’s a vast range to choose from. Some households like their roti thin and soft, while some like their rotis slightly thicker and well roasted. Some prefer to flavour their rotis with ghee or butter while others prefer to have it plain. Few households add oil to knead the dough while few households opt for water to do the same. Entrusting an elaborate process like this to an appliance such as automatic roti makers is a leap of leap not many of us are willing to take as yet. Rotimatic, however, is all set to change that!

Why Switch to an Automatic Roti Maker:

The primary appeal of an automatic roti maker lies in its role in economizing the time and effort one spends in the kitchen. This is especially beneficial to those pressed for time already due to their careers, education, or the very difficult task of raising children. While a person spends about an hour every day preparing fresh rotis, a roti maker can simplify and accelerate the entire process through automation.

There are scores of roti making machines available in the market that are gradually moving toward accelerating a revolution in how the world makes flatbreads. Just as varied are the choices of appliances one can choose from, so are the services executed by them. While some roti-makers assist solely with the process of roasting or heating a chapati, some others knead the dough and roll it into dough balls as well. A fully automatic roti maker such as Rotimatic is adept at making the traditional flatbread from scratch to the final product.

The device which is also described as a robot designed specifically for kitchens is AI and IoT enabled, can connect to the wifi and respond to commands received from smart devices. It can upgrade its software and troubleshoot when required. Rotimatic is always its capabilities and pretty will be doling out tortillas, wraps, and pizza base. 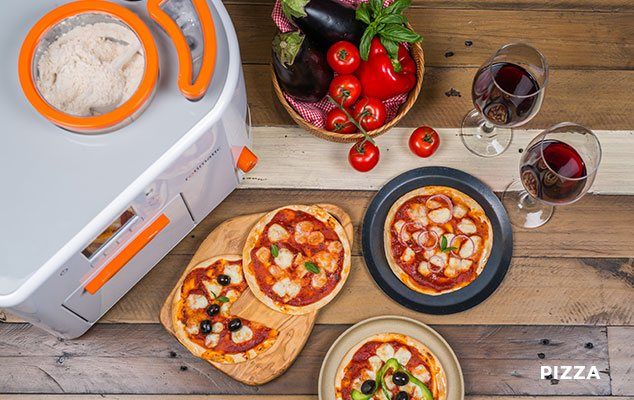 Rotimatic, 11 December 2017
Terms and Conditions
The following terms govern #RotimaticPizza Beta Program is hosted by Zimplistic Pte Ltd (“Rotimatic”) and any person who wishes to participate in the program agrees to abide by and bound by these rules.
1. ELIGIBILITY:
– Contest is open to participants residing in Singapore, the U.S.A, the U.K., Canada and Australia only
– Participant to be above the age of 18 years
– The participant is required to have a valid and active Facebook account
– The participant must own a Rotimatic
– Rotimatic reserves the right to ask for the order id & profile to check the eligibility
– Rotimatic reserves the right to seek from proof of age and/or nationality and any other information, detail etc. from the participants
2. HOW TO PARTICIPATE:
Steps how to enroll in the Beta program:
– Rotimatic owners to send a request to join the Rotimatic Owners Facebook Page: https://www.facebook.com/groups/RotimaticOwners/
– First 100 requests will get a unique opportunity to become a part of the Rotimatic Pizza beta program
– When you join the program you agree to share your feedback and experiences in this upgrade with the Rotimatic team.
– You may face some issues and bugs since you will be using a beta version of the update. We ask that you use your Rotimatic as you normally would, but inform us when you encounter a bug or error.
– Feedback on stability, as well as any other performance issues, is crucial and deeply appreciated.
– RotimaticPizza Beta Program will give users who opt-in access to the latest updates on Rotimatic before the general release.
– Successful participants will get an auto upgrade on 24 December 2017.
SUPPLEMENTARY RULES
– The information shared on the social media platform will be subject to the respective Social Media website’s Privacy Policy
– The Participants agree and permit Rotimatic to use their name, image, likeness, any other personal detail provided and publish their details in any medium to promote/advertise the Contents any other promotions, contents etc. which may be run by Rotimatic
– Rotimatic reserves the right to verify any information provided by the participant at any time and in case the information provided by the participant found to be incorrect whatsoever the case may be

Rotimatic – Margheroti Pizza and more roti recipes for your party

Rotimatic
10 Comments
Planning a party can seem like a daunting task and if it’s a party with kids, the challenges double. But with these roti recipes from the in-house chef at Rotimatic, we have got all bases covered.  Here are three roti recipes that are healthy, quirky, easy to prepare and most importantly, loved by all. As you will see, rotis are extremely versatile and can be used in various cuisines from Pizzas to Quesadillas! Hope these trigger some more fun and healthy roti ideas!
Let’s dive in to see how simply these recipes are prepared:

Who says pizzas are junk and unhealthy? Try the Margheroti Pizza loaded with mozzarella and made of whole-wheat flour. It barely takes any time to prepare, and makes for the perfect comfort food. Kids LOVE it! When too many guests turn up, Margheroti Pizza saves the day. The maximum roast level in Rotiamtic is ideal for the base of Margheroti Pizza.
If you’re looking for something super healthy, check out these healthy roti recipes from Rotimatic.

The Recipe for Margheroti Pizza:

Step 1: Preheat oven to 180 °C, stand by baking paper & tray.
Step2: On a medium heat pan, drizzle some olive oil. Sauté garlic and onion until caramelized. Add in pasta sauce and mix well. Remove from heat.
Step 3: Take a fresh roti, lay it on the baking paper.
Step 4: Spread the tomato sauce in the center. Leave some gap from the edges.
Step 5: Break the mozzarella cheese and place it gently onto the sauce. Drizzle some olive oil. Slide them into the oven. Bake for 4-5 minutes.
Step 6: Scatter basil leaves on the top. Season with salt. Ready to be served.

One word for this roti recipe- Yum! It has cheddar cheese and mozzarella cheese, what else you need, right? But for the health freaks out there, it even contains nutrition of spinach which provides your body with required iron. This recipe has a tradition of stealing the spotlight of the party.

The Recipe for Spinach and Cheese roti Quesadillas:

Step 1: Put butter on a medium heat pan. Add garlic and sauté until golden brown. Add spinach into the pan, cook for 7 to 10 minutes or until softened. Season with salt and pepper. Remove from heat, set aside.
Step2: Take a fresh roti. Spread the shredded mozzarella and cheddar cheese evenly. Spread about 2 tbsp of sautéed spinach on top of the cheese and place another fresh roti on top.
Step 3: Pan roast the filled roti until the cheese melts. You can also use a sandwich toaster to melt the cheese. This will bring a crisp texture to the roti and they are ready to serve.

This smoked salmon and lemon Crème Fraîche is simply scrumptious – all the flavours work so well together smoked salmon, lemon, sour cream….what’s not to love? With less than 3% fat and a tangy flavour that works in both sweet and savoury dishes, crème fraîche is the ideal ingredient for healthier cooking.

The Recipe for Smoked salmon and Lemon Crème Fraîche:

Step2: Take a fresh roti, cut it into 4.
Step 3: Tear smoked salmon into bite-size pieces and lay them onto the cut roti.
Step 4: Put lemon cream on top. Season with dill and they are ready to be served.
These roti recipes will make any party a memorable one with unique combination of being healthy and outlandish. So go ahead, plan a dinner this weekend and give your guests a taste of #RotimaticLife

P.S. Spinach and Cheese roti Quesadilla is our personal favourite. Let us know which you liked from these 3 roti recipes!