We have all heard of the more or less ubiquitous rice cooker. Most South Asians have now become accustomed to using the numerous variants of the kitchen appliance for cooking one of the most popular stables of their diet – rice. The other favorite food staple of South Asians, roti, however, is still largely made by hand. And although the process of making this flour-water-oil flatbread may seem simple, it is quite the task. For someone who is not an expert in the art of making rotis, the traditional method of doing it is complex enough for them to choose quickly choose ready-made alternatives. Zimplistic’s Rotimatic – a fully-automatic roti maker perfect for domestic use – has emerged as a game-changer for how we are accustomed to preparing the age-old recipe. Pranoti Nagarkar, Founder and Co-CEO of Zimplistic, recalls her earliest memories of rotis being that of her mother laboring away in the kitchen to bring fresh rotis right off the pan to the table. Similar to most people who shoulder the responsibility of cooking chapatis, phulkas, or rotis, Pranoti recollects her mother too compromised on the time she could have spent with her family at the dinner table. Sadly, without investing adequate time and attention, the effort put into yielding soft and fluffy rotis goes to naught.

To understand this better, one has to consider the actions that go into making a roti. The dry and wet ingredients are carefully measured out in the correct proportion of the mix. The water added should preferably be of a certain temperature (warm) to facilitate kneading of the dough to the ideal consistency. After a period of rest, this dough is then evenly flattened into thin discs which are then roasted in a pan or directly over a flame. When cooking for an average of four people, the time taken for rotis could be well over half an hour. Rotimatic notably compresses this time down to a few minutes using automation.

Pranoti experienced the struggle of making rotis daily first-hand and decided it was about time the roti-making process got a technological update. Thus, the combined efforts of Pranoti and Rishi came about Zimplistic’s Rotimatic that recreates all the steps. Beyond the act of pouring flour, water, and oil into their designated compartments in the machine and pushing a few buttons, Rotimatic does not require any further user intervention.

Rotimatic is equipped with AI and IoT

Rotimatic is a high-tech robot with its 10 motors, 15 sensors, and 200 moving parts controlled by a 32-bit microprocessor. Its highlights though are the AI and IoT features that allow it to be paired with iOS or Android applications. Synced devices such as smartphones enable users to operate it through the installed Rotimatic app from afar. The automatic roti maker also automatically downloads updates for its software as and when those are released in the cloud. Rotimatic thus evolves and expands its gamut of functions and ability to troubleshoot. 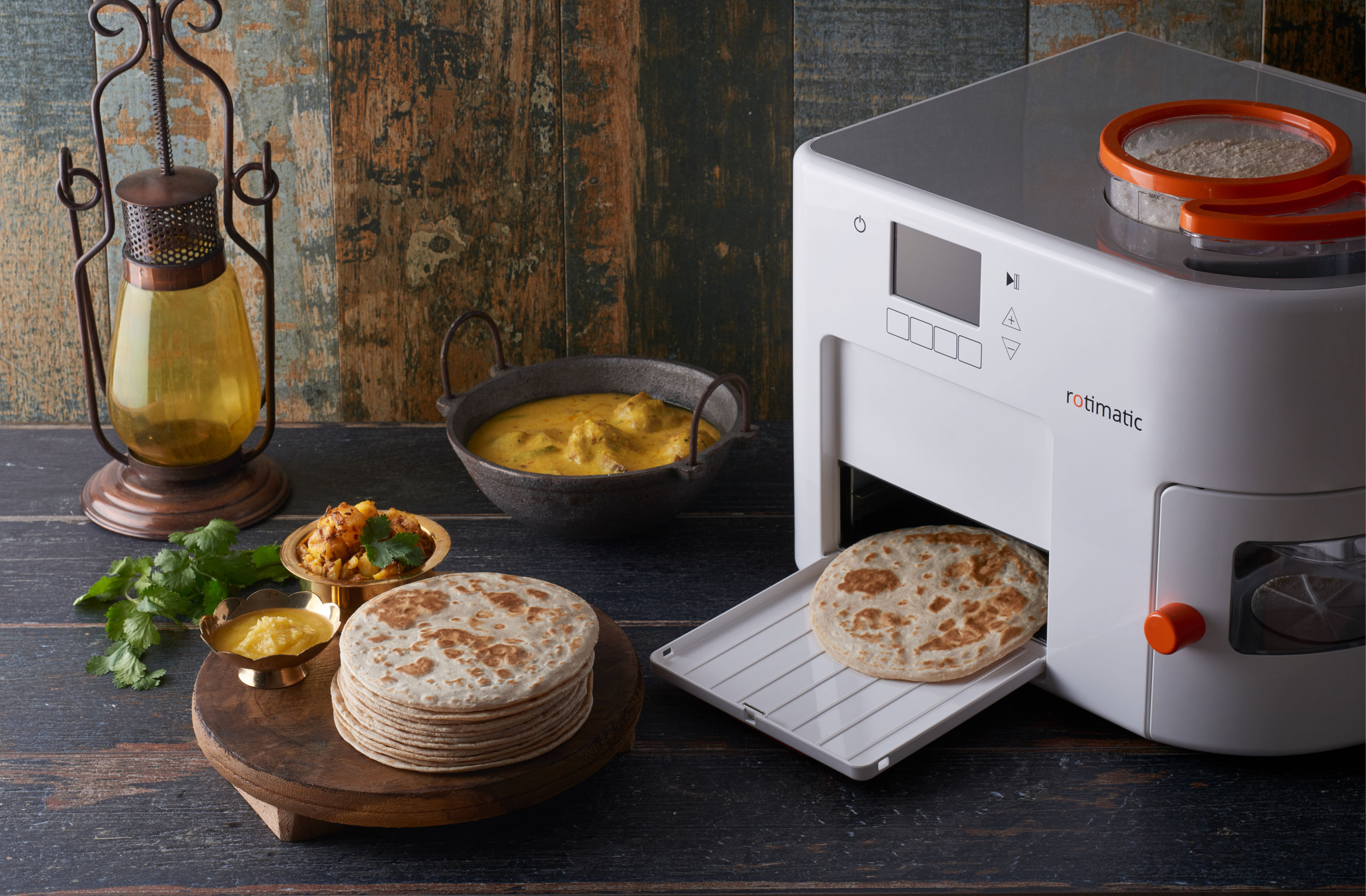 Rotimatic is a hit with the masses

Time is money, and any means that affords us more of it has a thick chance of winning the hearts of people. Rotimatic does exactly this and more. The device shrinks the time taken to make rotis by the traditional method which is rarely less than 30 minutes at least to a matter of a few minutes. It takes about eight minutes to warm up and then continues to give warm, fluffy, fresh flatbread in less than two minutes a unit.

Rotimatic uses its sensors to measure and dispense the exact amount of ingredients required in the dough mix and kneads it to the ideal consistency. The dough is then moved by a mechanical arm to another part of the appliance where it is evenly flattened into a disc and then roasted on heating plates. A steaming golden-brown roti is slid out on a tray at the front bottom of the Rotimatic at the end of the process. One can specify the oil content, thickness of the flatbread, level of roasting, and the number of rotis to be made in a batch. Every roti made in a batch has consistent quality.

The other factor that is a hit with users is the ease of maintenance of the appliance. It is very simple to clean, and given its IoT feature, it does not have to be carried to a service station any time there is an issue with its performance.

Rotimatic is here to stay

As our lives continue to get more hectic we will continue to look for ways to economize the time we spend on each task. An appliance like Rotimatic is a boon for professionals and those who wish to do more with their time and explore their interests. Kitchen robotics is the next big thing and Zimplistic’s Rotimatic has strengthened the foundation for new-age innovations to build on.